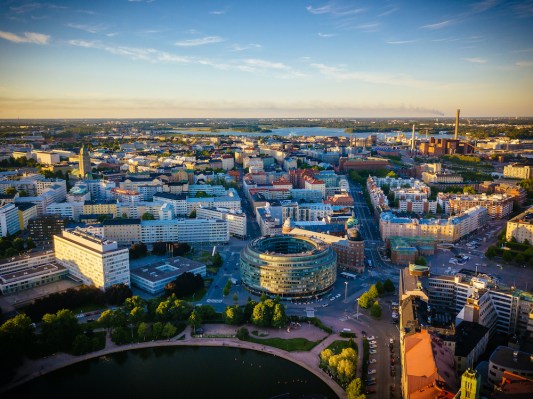 In September 2020, Helsinki’s City Council approved plans for an expansion of the existing “Maria 01 Campus,” a former downtown hospital complex. Even before it starts spreading its acreage, the facility is already home to 120 startups and 12 venture capital funds. The campus is owned by the biggest startup conference in the Nordics, Slush, the City of Helsinki and Helsinki Enterprise Agency and is slated to become one of the largest, if not — possibly — the largest tech startup campus in Europe, at 70,000 square meters (or 75,3473 square feet) by 2023.

The scale of the project speaks to the confidence and ambition of the Helsinki startup ecosystem, which has grown immeasurably over the last 10-15 years.

The fact that Slush, a conference, is involved is no accident. The event is a nonprofit created by the university. This has enabled it to scale to one of Europe’s largest tech events (pre-COVID) at over 20,000 attendees. Its success has also led to traditionally conservative Finns embracing entrepreneurship. The entire city gets involved, and thousands of university students volunteer for the good of the city and the ecosystem. The collegiate nature of the Slush experience has reflected how Helsinki has grabbed the opportunities of tech with both hands.

Born of Aalto University and its student society for entrepreneurship, AaltoES, Slush originally started as a tech meetup. Indeed, I went to some of the first ones. But with the 2010’s success of local startup Rovio, creator of Angry Birds, as well as Supercell, creator of Clash of Clans, the event took off. It helped that Peter Vesterbacka (previously a pioneer at HP Bazaar Labs) was a tireless promoter of Slush and egged it on from being a meetup into a full-blown conference that could attract the biggest names in tech.

Slush’s ability to attract VCs to a Northern European country in the middle of winter was impressive. The city rolled out the red carpet. That meant inbound VC exploded. According to the Finnish Venture Capital Association (FVCA), VC investment into Finland grew almost five times to €188 million between 2014 and 2018. Finland is now a European leader in terms of venture capital (says the FVCA) as a percentage of GDP, and foreign VC investments grew by 58% between 2017-18.

Slush has even seen ex-employees go on to found big startups. Food delivery startup Wolt, co-founded by Miki Kuusi an early CEO of Slush, has raised $160 million. Other big startup companies from Helsinki’s ecosystem include Smartly, Singa, Giosg, ZenRobotics and Blok. And let’s not forget it produced MySQL and CRF Health back in the day. In 2018, Small Giant Games, was acquired by Zynga in a deal worth up to $700 million.

Startup Genome marks out Helsinki as one of the top global ecosystems. For 2020, it valued the Helsinki startup ecosystem at $5.8 billion, with total early-stage funding of $511 million, higher than the global average for emerging ecosystems.

Helsinki has around 250 gaming enterprises and 30 of them exceed $1 million in annual sales. In 2017 Finland was the first EU country to publish a national AI strategy and the University of Helsinki created a free AI education program that saw approximately 90,000 people from 80 different countries enroll in the first four months.

Over the whole country, nearly 300,000 Finns work in tech, an enormous amount when you consider the population of Helsinki is 1.3 million.

According to analysts Tracxn top startups include:

To learn more about Finland’s startup ecosystem, we spoke to these investors:

What trends are you most excited about investing in, generally?
We are a generalist but are keen on deep tech and brand-driven companies both in B2C and B2B. We have been tracking closely new materials-based innovations, as well as breakthrough innovations in quantum computing. Breakthroughs happen also elsewhere and [we] have invested in B2B SaaS as well as one cloud-native massive multiplayer game company.

What’s your latest, most exciting investment?
One the latest investments is in a Swedish company called Carbon Cloud. They make it easy to discover your climate footprint and show it to the world — they can be found, for example, on the side of Oatly’s packaging. Carbon dioxide impact of consumer goods should be as visible as the nutrition values in food.

Are there startups that you wish you would see in the industry but don’t? What are some overlooked opportunities right now?
Femtech. There’s still quite little competition, but tremendous amount of work to do. Our team is keen to see more solutions on reproductive health, but also going beyond to solutions e.g., in syncing female’s personal cycle with optimal nutrition or training.

What are you looking for in your next investment, in general?
The team is always in the center and we are looking for entrepreneurs that are rewriting the future in global markets.

Which areas are either oversaturated or would be too hard to compete in at this point for a new startup? What other types of products/services are you wary or concerned about?
Free-to-play games is a tough and competitive market. There will likely be new winners, but also even greater number of companies that don’t make it compared to many other industries.

How much are you focused on investing in your local ecosystem versus other startup hubs (or everywhere) in general? More than 50%? Less?
We have a global mandate, but the Nordics is our home and where we have done most of our investments.

Which industries in your city and region seem well-positioned to thrive, or not, long term? What are companies you are excited about (your portfolio or not), which founders?
There are several, but the first on the top of mind is sustainability and new materials. Spinnova is a great example providing the textile industry with the most sustainable fibre in the world, produced with minimal harm to the environment, at a reasonable cost. With the stretch and strength qualities of cotton and the insulation of lamb’s wool, it can suit apparel, footwear, accessories, [and] home textiles to name a few applications. I’m also looking forward to seeing a great ecosystem and several startups being built around quantum computing. There are already a number of promising quantum technology companies, such as the Finnish IQM that builds world-class quantum computers and Bluefors that specialize in cryogen-free dilution refrigerator systems for quantum computing.

How should investors in other cities think about the overall investment climate and opportunities in your city?
There is strong supporting ecosystem in Finland for startups, strong engineering history and great culture of getting things done.

Do you expect to see a surge in more founders coming from geographies outside major cities in the years to come, with startup hubs losing people due to the pandemic and lingering concerns, plus the attraction of remote work?
The beauty of the startup ecosystem is that is built on innovation. We will most likely see more distributed organizations in the future, but I believe the major hubs will maintain their attractiveness in the future as well.

Which industry segments that you invest in look weaker or more exposed to potential shifts in consumer and business behavior because of COVID-19? What are the opportunities startups may be able to tap into during these unprecedented times?
Travel and hospitality has naturally taken a big hit. It will take time for the industry to fully recover and I would expect innovations in the domain in the future, whether it is in virtual travel or creating confidence in worry-free travel in the future.

How has COVID-19 impacted your investment strategy? What are the biggest worries of the founders in your portfolio? What is your advice to startups in your portfolio right now?
Extending the runway has been a general rule for many and making the company stronger and more competitive when things start picking up again.

Are you seeing “green shoots” regarding revenue growth, retention or other momentum in your portfolio as they adapt to the pandemic?
Customer support agents have been strained during the pandemic. Our portfolio company Ultimate.ai has been well-positioned to scale the customer support with their virtual agents while maintaining or even improving customer experience. I’ve been super happy to see them grow and expand rapidly.

What is a moment that has given you hope in the last month or so? This can be professional, personal or a mix of the two.