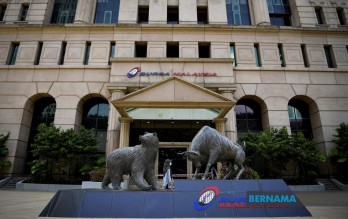 In a note today, it said Bursa Malaysia is scheduled to release its first quarter 2021 (Q1) results on April 17.

The research house expects an earnings growth of 10.6 per cent quarter-on-quarter and 79.2 per cent year-on-year of RM116 million based on the higher DATV and average daily contracts (ADC) traded for derivatives.

From January to February 2021, the percentage of DATV contributed by foreign institutions remained stable at 16 per cent.

Trades from retail investors accounted for 36 per cent of the DATV, which was still higher compared to 38 per cent in FY20.

The listing of Flexidynamic Holdings Bhd on the ACE Market is expected on March 30 2021.

“Under the Pemerkasa stimulus package announced on March 17, 2021, a 12-month waiver of listing fees will be granted to companies seeking IPO on the the Main, ACE and LEAP Markets. This is expected to further attract more companies to list on the local market,” it added.

In Q4 2020, Bursa Malaysia booked a conservative RM13.6 million in provisions for the potential tax charges on digital services after the recent change in the scope of the Sales and Services Tax.

“This was despite clarifications still being sought from tax authorities on the matter. We gather that in FY21, Bursa Malaysia will continue to set aside provisions for these taxes prudently until confirmation is received from the authorities.

“We understand that the exchange intends to review the listing and clearing fees for the securities market. However, changes to these fees (if any) are not expected to be implemented anytime soon,” it added.