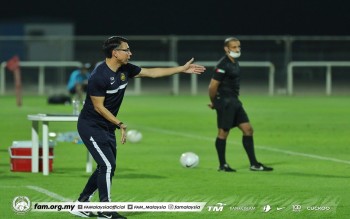 KUALA LUMPUR, May 24 — Harimau Malaya head coach Tan Cheng Hoe has rallied his men to buck up and raise their performance following their 4-1 loss to Kuwait in an international friendly played behind closed doors in Dubai, the United Arab Emirates (UAE) yesterday.

The match played at The Sevens Stadium is part of Malaysia’s preparation for the 2022 World Cup/2023 Asian Cup Qualifying campaign, which begins in the UAE next month.

Cheng Hoe, however, hopes his men will use the defeat as a lesson to regain their rhythm and play with more conviction in their Tier 1 international friendly against Bahrain in Manama on Friday (May 28).

“Overall, we, the coaches, are still not satisfied with how the players performed. We have yet to reach an acceptable level.

“We know that this result will affect team morale but I feel that players too are disappointed with the result. But what is important is that we rectify our weaknesses when we take on Bahrain,” he said in a video clip uploaded on to the official Football Association of Malaysia (FAM) Facebook page today.

In the friendly late last night, Malaysia managed to hold Kuwait at 1-1 in the first half before the world number 148 side came alive after the break to slot in three more goals. To be fair, Cheng Hoe did make nine substitutions for the second half.

Although naturalised player Guilherme De Paula managed to score a consolation goal, the fact remains that the Harimau Malaya suffered a defeat in their first competitive match in 18 months.

Malaysia will resume their challenge in the second round of the qualifying campaign, which had been suspended due to the COVID-19 pandemic, by taking on Group G rivals the UAE on June 3, Vietnam (June 11) and Thailand (June 15).

“The coaching panel will review the team’s weaknesses. We still have time to improve and enhance our team’s performance to their actual level,” said the 52-year-old Cheng Hoe.

He added that, based on yesterday’s match, they have a rough idea as to who will be in the starting 11 for the match against the UAE.