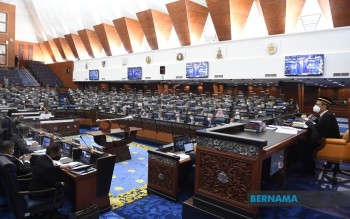 KUALA LUMPUR, July 26 — The issue of contract-appointed healthcare workers has drawn the attention of several members of Parliament (MPs) at the special sitting of the Dewan Rakyat today.

Datuk Seri Anwar Ibrahim (PH-Port Dickson) during the debate session urged the government not to take the matter lightly because contract doctors diligently perform their duties as do permanent doctors.

He said the contract-appointed doctors have been working laboriously, adding that the situation should not be ignored until the doctors had to resort to hartals (mass protests) and legal actions.

Datuk Seri Jalaluddin Alias (BN-Jelebu) said the issue plaguing the capability of the health system and the readiness of frontline workers in facing this pandemic needed to be resolved soon.

He urged the government to give priority to resolving this issue as healthcare workers, including contract workers, are heavily burdened following the rise in COVID-19 cases in the country.

Meanwhile, Nurul Izzah Anwar (PH-Permatang Pauh) wanted the government to use the ‘Hartal Doktor Kontrak’ protest to resolve the issue and implement plans to reform the health system.

“I hope the government will not take any action against the doctors who joined the protest, please settle it nicely,” she added.

Datuk Dr Nik Muhammad Zawawi Salleh (PAS-Pasir Puteh) said that the government should offer a four-year service contract to the group, instead of a two-year contract so that it can conduct better planning in the appointments of medical, dental and pharmacy officers.

The government had previously agreed that contract-appointed medical officers, dental officers and pharmacists will be offered an additional two-year contract after completing their mandatory working period to ensure continuity of service and preparations for specialist studies for contract healthcare workers.

It is part of Cabinet’s immediate solution after the Health Ministry presented a recommendation to Cabinet on July 14, to improve contract work involving pharmacists, medical and dental officers.