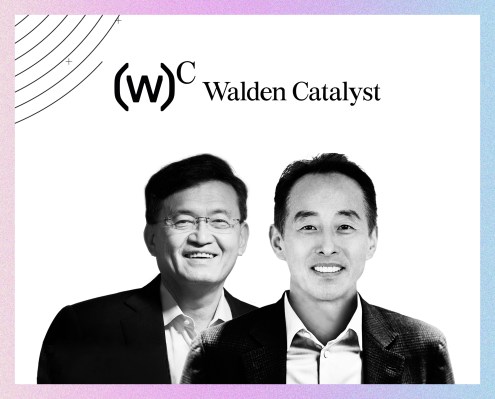 Over the past 20 years, there has been a steady flight of capital away from deep-tech – those science-and tech-related breakthroughs on which world-changing businesses are built, Walden Catalyst said.  The VC firm has a belief in the ability of data as the “fuel” and AI as the “engine” to transform the way people live, work and play.

The San Francisco-based venture capital firm announced today the closing of a $550 million fund, which was oversubscribed. The company did not disclose the names of its limited partners.

Sohn and Tan, who have proven track records across the semiconductors, cloud, and electronics industries, are early investors in many tech companies, including Zoom, Inphi, Berkeley Lights, Habana, and Nuvia.

“Walden Catalyst is a new fund founded in early 2021, but it has a strong legacy from Walden International and Samsung Catalyst Fund,” said Sohn, who previously held the position of corporate president and chief strategy officer at Samsung Electronics. Tan is also the founder and chairman of Walden International.

Walden Catalyst focuses on the U.S., Europe, and Israel as it sees consistent breakthroughs from the three regions in the areas of its interest, deep tech, Young said. Also, its partners have deep networks in those countries, having invested in the deep tech industries over the last few decades, helping Walden find breakthrough ideas attracting top entrepreneurs, Young added.

To date, Walden Catalyst has invested in six deep-tech startups, three in the US, two in Israel, and one in the EU, Young continued. Walden Catalyst’s portfolio companies include Speedata, MindsDB, AI21 Labs, and the other three companies that remain in stealth mode, he mentioned. The company’s initial ticket size ranges from a few million to $25 million in one round, Young noted.

“Data paints a picture. It tells a story that informs and enlightens,” Sohn said. “The amount of data in the world keeps doubling every two years, but only about 2% of all data is analyzed, so there is much more we can do to gather meaningful insights. We are excited and honored to work with the next generation of deep-tech entrepreneurs across the U.S., Europe and Israel, who are seizing on the data explosion and will ultimately change the world.”

The team of four additional partners – Shankar Chandran, Roni Hefetz, Francis Ho, and Andrew Kau – has decades of experience on investments and exits in the deep-tech space.

Walden Catalyst is committed to leveraging its operational and investing experience to help early-stage entrepreneurs rapidly scale and innovate as they build the next generations of businesses. The company believes that entrepreneurs are the heart of economic growth and innovation.

“We look forward to partnering with the next wave of industry visionaries to help them [entrepreneurs] unlock innovation and accelerate growth. Entrepreneurs are the engine of our future, and Walden Catalyst was created to share in that journey and assist in the many amazing breakthroughs that are yet to come,” Tan said.

The company has close ties to the Extreme Tech Challenge (XTC), a startup competition and ecosystem for entrepreneurs addressing global challenges aligned with UN Sustainable Development Goals. Walden Catalyst shares XTC’s mission of finding the next great disruptive startups that can reach a massive scale while having a meaningful impact on the planet.