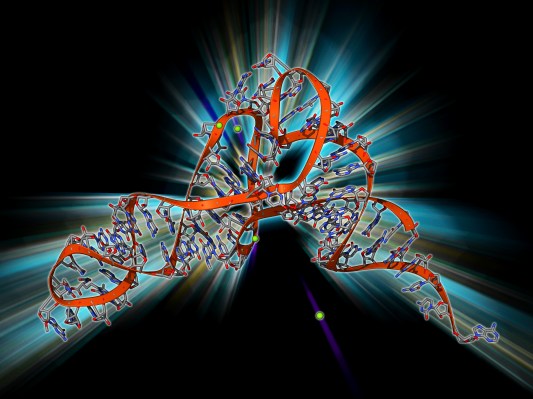 On Tuesday, Flagship Pioneering, the major investor behind Moderna, announced yet another addition to their portfolio of RNA-curious companies. Following a year of hype around mRNA, a new company, called Alltrna, will now focus on developing medicines based on Transfer RNA or tRNA.

At this point, you’re likely familiar with the idea that messenger RNA (mRNA, the stuff used in Moderna and Pfizer’s COVID vaccines), is a set of genetic blueprints that tells the cell to assemble certain amino acids, and join them together into proteins. Think of tRNA as a n L-shaped molecule that does the actual work of assembling the amino acids called for in the mRNA blueprint. Transfer RNAs perform one of the final steps our cells use to take genetic code and turn it into a functional protein in the body.

Alltrna’s thesis is that one tRNA could be used to treat “thousands of diseases,” as Lovisa Afzelius, an origination partner at Flagship and co-founder of Alltrna told TechCrunch. The company has been in proto-mode for the past three years, where its team of 30 people has been developing a “platform” for tRNA therapeutic development.

“It’s a really critical molecule,” said Afzelius. “Yet it has been, until now, completely overlooked as a modality. What we have developed is a broad tRNA platform that allows us to explore the totality of tRNA biology.”

Moderna and Pfizer’s COVID-19 vaccines have proved to be a pretty convincing demonstration of what mRNA technology can do. But this has also been a big year for funding for other alternative RNA projects.

In May, Flagship unveiled Laronde, a company aiming to develop 100 different endless RNA (eRNA) products and drug programs within the next decade. eRNA is a type of RNA developed specifically by Flagship, and is designed to prolong the therapeutic effects of certain medicines, or create “persistent” expression of therapeutic proteins in the body.

The idea of tRNA-based medicine is still relatively new, but it is starting to attract more attention. Three startups, ReCode Therapeutics, Shape Therapeutics, and Tevard Biosciences, have all collectively raised $240 million to develop tRNA-based therapeutics, C&EN reported in September 2021.

Alltrna’s big sell on tRNA is its potential to intervene in a huge variety of diseases. Theonie Anastassiadis, a principal at Flagship, and co-founder and chief innovation officer of Alltrna argues tRNAs have the ability to control “many aspects of translation.”

For instance, certain pools of “proliferation tRNAs” are involved in cell division (and some studies have suggested that down regulating certain tRNAs could be one way to slow cell proliferation in response to cancer).

tRNAs can also correct issues arising from erroneous genetic code. Some genes may contain mutations that act as premature “stop” signs (called stop codons). These stop signs tell the body to stop making certain proteins, even if the protein isn’t complete, leading to complications. Premature stop codons are a big player in genetic disease, and could be implicated in anywhere from 10 percent to one-third to  of all inherited genetic disorders or cancers.

The idea behind engineering tRNAs, says Afzelius, is that they might read those stop signs anyway, but assemble complete proteins anyway.

“These actual stop codons can be the same across thousands of diseases. There is the same amino acid that needs to be resorted in all those proteins. We can actually use that same tRNA medicine across that broad range of genetic diseases,” she said.

Alltrna’s approach to tRNA begins by expanding the tools needed to actually do tRNA based medicine development. Basic methodologies for expressing tRNAs, measuring their levels, modifying them and synthesizing them are currently “extremely technically challenging” says Anastassiadis.

“The first thing we did as part of the platform was actually build these tools that are not proprietary to Alltrna,” she said.

The development of this platform for tRNA therapeutics is about as specific as the company will get about its plans. So far, the company has not disclosed any partnerships, nor are they disclosing specific diseases they’re currently working on.

So far, Flagship has committed $50 million to the Alltrna – the same amount it initially supplied to LaRonde this year. In the future, Afzelius says the company will plan to pursue outside investment “when the time is right.”