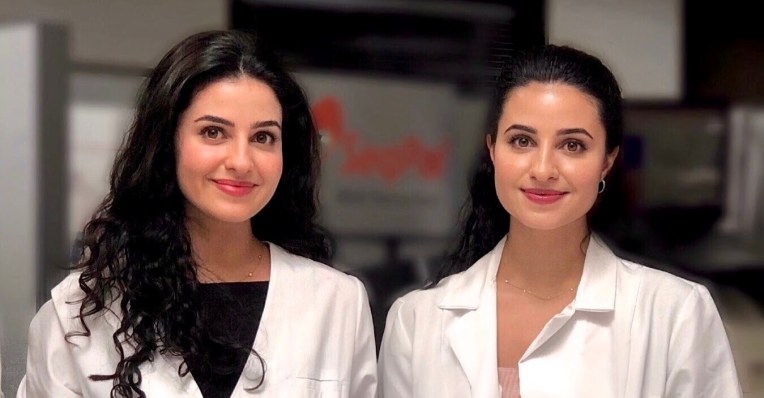 When you think of green, climate-aware industries, you’d be forgiven if fashion isn’t at the top of your list. Rubi Laboratories wants to put a dent in that by creating new, environmentally friendlier fabrics. The company does that by capturing waste CO2 and creating natural textiles, bypassing agriculture and manufacturing. The company claims it is carbon-negative, water-neutral and naturally biodegradable.

Not a moment too soon, either — the fashion industry emits more carbon than international flights and shipping combined, representing around 10% of greenhouse gases every year, the BBC reports. While it’s laudable to make the industry greener, I’d argue that the problem may actually be with the fashion industry itself; in a world where an item of clothing is worn an average of seven times before it is discarded, it seems like the “reduce, reuse, recycle” mantra of greener living falls short on all three counts, as far as fashion is concerned. Still; people are gonna people, fashion isn’t going to go away in a hurry, and perhaps it’s better if a garment worn twice rots away and fades from memory in a landfill faster rather than slower.

Against that backdrop, Rubi Laboratories is flying a green banner over the industry with “carbon-negative cellulosic textiles.” The company, founded by the nieces of the founder at the Bebe fashion brand (with a market cap north of $100 million as I’m writing this), announced it raised a $4.5 million seed funding round from Talis Capital and Necessary Ventures, and a fistful of additional institutional investors (the company’s press release lists Climactic, Collaborative Fund, Plug and Play, Incite Ventures, Darco Capital, Cayuse Partners, Axial VC, Climate Capital Collective and CapitalX) and a slew of angel investors (including James Reinhart, CEO and founder of thredUP; Manny Mashouf, CEO and founder of Bebe Stores; Nicolaj Reffstrup, founder of GANNI; Alexander Lorestani, CEO and co-founder of Geltor; and Rei Wang, co-founder of The Grand and former CEO of Dorm Room Fund). On top of that, the funding round also includes a $250,000 grant from the National Science Foundation.

A big leap of technology

“I’ve always been passionate about sustainability and climate. When we founded Rubi, it all just clicked together. Starting when I was 15 years old, I published my first paper on artificial photosynthesis at the Lawrence Berkeley National Lab,” explains Neeka Mashouf, CEO at Rubi Laboratories. “Since then, I have been really focused on sustainable materials research. I studied materials engineering and business at UC Berkeley, and then dabbled in launching ventures around sustainability.”

For Rubi Labs, the duo developed technologies and filed a number of patents. Its first product is a cell-free biocatalytic process that resulted in viscose — also known as Rayon — the third-most used textile fiber by the world. It is used as a cheaper and more durable alternative to silk and synthetic velvet. It is typically made by taking wood pulp, dissolving it in chemicals and spinning it into fibers that can be turned into threads. Threads make fabrics, fabrics make clothes, you get the picture.

“I found myself really wanting to understand the biological systems that evolved to build carbon-based life, and how you could take inspiration across nature and engineer intelligent systems of biology that could solve human problems that evolution itself was not necessarily solving for. I’ve worked in bioengineering research labs since I was around 15, as well, leading projects from ideation and execution and transfer to clinical trials, mostly focused on solving one of the arguably most difficult-to-treat diseases in medicine: brain cancer,” says Leila Mashouf, CTO at Rubi Laboratories. “And that work led me to medical school at Harvard Medical School, where I was exposed to so many different speakers who came in, who talked a lot about climate change and the threat to human health that climate change posed.”

To fulfill its goals, Rubi captures CO2 from the waste streams of manufacturing facilities using its proprietary enzyme system. It is able to capture and convert CO2 from a gas input at any concentration.

“What’s exciting is our technology is actually really flexible on the source of CO2. We’ve tested and proven that it can work even on direct air capture, which is very low levels of CO2,” explains Laila Mashouf. She adds that it makes even more sense to capture CO2 from sources directly related to textile production. “We like to use concentrated sources of CO2, like flue gas from a factory, or an industrial source.”

Once captured from whatever source is available, CO2 is then converted into cellulose, which can then be used to create viscose-based yarn. By utilizing enzymes as the catalyst, Rubi claims it is able to turn 100% of CO2 input into the reactors into an end product, all with zero waste. If at some point the company is able to replace all of the viscose used in the fashion industry, the product is widely used in other industries, too, such as automotive tires, food, packaging and building materials.

As mentioned, the company raised $4.5 million, which is largely earmarked to develop the product from the concept and sample-scale to launch commercialization.

“We were really looking for investors who could see this sustainable symbiotic future that we see as possible, and who were willing to take the risks that are part of the journey, and who believe in us as founders. I think we really found that in our investors,” says Neeka Mashouf. “We’ve found such visionary, inspiring and supportive investors like Talis and Necessary Ventures. I think it’s like the perfect team to make this happen.”

From an investors’ point of view, Talis saw an enormous opportunity to shake up the textile industry.

“When we think about where [Talis Capital] likes to invest, materials was always a big one. In the next decade or so, we really need to rethink everything around us, from chemicals to building materials to packaging. Textiles is one of them, too. I have spent a lot of time in the fashion space, and we are acutely aware of the problem the industry has from a supply chain perspective. What we really liked about Rubi was that if we look at the textile space, there’s cotton as the most-used material, but it’s really hard to remake that with synthetic biology. Then there’s polyester, which is a great material, but it’s a kind of plastic and a fossil fuel-based material,” Cecilia Manduca, associate at Talis Capital explains. “And then finally there’s viscose, which is the third-largest material. It comes from natural base materials but has a lot of production problems. But if you can clean those up, you can have a massive impact in the space. We started to look there, and we liked the look of it from a returns potential and impact perspective. We found Rubi, and we love their CO2 approach. It fits perfectly.”

Far from me to be a skeptic of anyone trying to do something good in green tech — every little helps — but I do note that it has been a long time since I’ve seen a relatively small round that had that many institutional and angel investors on the cap table, especially from a set of founders who are as well-connected to the high-net-worth universe of fashion as Neeka and Leila Mashouf. Trying to make sense of it, I asked Talis Capital what the deal was. “It’s a family business, but it’s not their family business,” explained Manduca, who ran point on the deal alongside one of the firm’s partners. A slightly curious comment, given that the headline on the press release Talis Capital sent me referred to the founders as “Bebe Stores heiresses.”

Spooling up for launch

Rubi’s first textile samples are expected to be available in February 2022. Rubi has validated its technology by creating a successful prototype and claims it has developed test plans with numerous top-tier global retail and fashion brands. Rubi is also in discussions with various multinational energy and manufacturing companies to provide CO2 to scale up production.

For now, the company targets the fashion industry, as its product comes at quite a premium compared to the existing fabrics that are available; but as the technology improves and scale increases, the company is hoping to drive prices down, too.

“Our goal is to reach price parity with standard viscose. That really unlocks [our product], because viscose is a really common material both in fast fashion and in higher-scale designer fashion too,” explains Neeka Mashouf. “Being able to be price-competitive with the standard textiles on the market means that the playing field has been leveled.”

“Our vision is a world where human prosperity and economic growth is planet positive. And we really see this technology reaching that vision by being a platform technology,” says Neeka Mashouf. “We’re rethinking the way that we produce materials starting with textiles, but also extensible to other things, like building materials, packaging, food and so much more. We can achieve this vision that’s symbiotic with the planet using CO2 to make critical materials in a way that is water and land-neutral, chemical-neutral, symbiotic with the planet.”