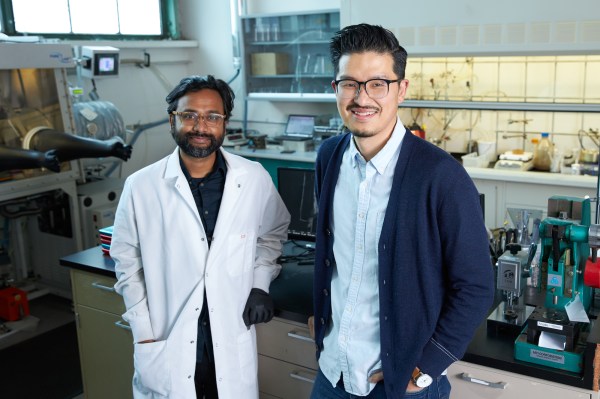 Five years ago, Jonathan Tan and Roger Basu were on the hunt to find an industry where they could take their expertise in thin-film technology and make the biggest and fastest impact possible. They chose batteries — or more specifically, battery degradation and lifespan.

It wasn’t — and still isn’t — an industry lacking in investment, research or companies claiming to have struck battery breakthrough gold. But the pair contend they have zagged where everyone else has zigged.

Tan and Basu, who co-founded California-based startup Coreshell in 2017, said they steered clear of trying to develop a new battery from scratch, an expensive and lengthy undertaking that numerous companies were already working on.

Instead, they focused their efforts on nanolayer coating technology that can be added to a battery cell manufacturer’s existing production system. This coating increases usable battery capacity by 30% or more and increases heat tolerance by 200%, all while lowering costs and improving safety, according to the Coreshell founders. It can also be applied to batteries with different chemistries and applications, including consumer electronics and electric vehicles.

Coreshell has found support for its novel approach from several investors, battery manufacturers and even iconic dune buggy company Meyers Manx. Its quiver of advisers has also been loaded up with experts, including Tesla co-founder Marc Tarpenning; Chunmei Ban, a professor at the University of Colorado known for her work at the National Renewable Energy Laboratory; and Judith O’Brien, who has made a career out of helping companies IPO.

The pair initially bootstrapped the company, then went through the Alchemist Accelerator in 2020 and raised some seed money.

Since then, Coreshell has begun a collaboration with BASF to work on several different coatings for advanced cathode materials, as well as demonstrations with other battery cell manufacturers that Tan could not name. The company also recently raised $12 million in a Series A round led by Trousdale Ventures, Industry Ventures and Helios Capital Ventures. Existing investors Entrada Ventures, Foothill Ventures, and Asymmetry Ventures also participated in the round. Coreshell has raised $19 million to date.

Coreshell’s relationship with Trousdale Ventures and, more specifically, managing partner Phillip Sarofim also led to a partnership with Meyers Manx. A prototype Meyers Manx electric beach buggy will be the first vehicle to have the Coreshell technology “inside.”

Sarofim, who is also chairman of Meyers Manx, said the partnership fits into the Meyers Manx mission to “continue bringing adventure and fun to the world, but with even more performance capabilities to match the expectations of modern-day consumers.”

The Meyers Manx demonstration, plus collaborations with other battery cell manufacturers and automakers, allows Coreshell to show off the full capabilities both at the cell level and at the device level, as well as the speed at which it can be applied to vehicles, said Tan, a chemical engineer turned technical business development executive.

The company is also working with New Era Converting Machinery to demonstrate how its thin-film coating technology can be used in roll-to-roll processing. If successful, Coreshell could convince automakers and cell manufacturers to adopt its technology.

Battery producers use a continuous process called roll to roll. Cut open a cylindrical cell and you’ll see what looks like a jelly roll of electrodes, Tan explained. Before they’re put into the battery shell, these are essentially large rolls of electrodes on foil.

“Obviously, it’s much smaller to start off with, but even just showing off that capability is a key step towards being able to show that, ‘Hey, you can slot us right in and get the performance enhancements of solving battery degradation and having increased capacity, while lowering manufacturing costs,’” Tan said.

“It seemed like every six months there was some breakthrough announced that was gonna have some big step in battery capacity or price reduction or whatever the metric is — and that just never happens,” Tarpenning said. “Part of it is that a lot of these techniques that work in the lab don’t scale very well, or at all, or they require an enormous change in the process.”

Coreshell appealed to him because it can be added to a cell manufacturer’s existing operation.

“You can actually slot it in and see see how it scales in an existing factory — and that to me was huge,” he said. “I was like, wow, OK, that that’s one of those big sort of chicken-and-egg things that just got solved.”