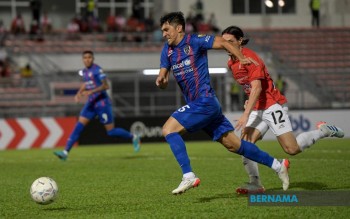 Things went from bad to worse in the second half when the City Boys had D. Kenny Pallraj sent off after he was shown a second yellow card for fouling JDT’s Leandro Velazquez.

With the City Boys down to 10 men, JDT turned on the style and Bergson da Silva helped himself to a brace. He scored from the spot in the 81st minute before adding his second – and his team’s third – for the night a minute later.