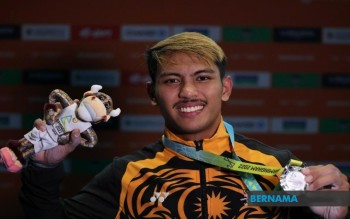 Malaysia, who bagged two weightlifting gold medals yesterday, captured a silver this time through Muhammad Erry Hidayat in the men’s 73-kilogramme (kg) category after he finished behind India’s Achinta Sheuli.

The 22-year-old Muhammad Erry tried to challenge for the gold medal but his effort at lifting 176kg (clean & jerk) on his final try fell short.

Muhammad Erry, who is the son of former national weightlifter Hidayat Hamidon, had to be contented with an overall lift of 303kg, having recorded 138kg in snatch and 165kg in clean & jerk.

Although Muhammad Erry seemed calm at first when answering questions from reporters, he could not hide his disappointment when asked about the promise he had made to his father.

“I want to apologise to my father because I had promised him that I would get the gold medal here, instead I could only get a silver. Forgive me dad… and also all weightlifting fans in Malaysia as well as my coach who has been training me since I was a kid,” he said.

His father, Hidayat, won the weightlifting gold medal at the 1998 edition in Kuala Lumpur.

Muhammad Erry, who is still not 100 per cent fit after contracting dengue fever two weeks ago, said he was still proud to have bagged the silver medal as it made up for his disappointing fifth placing in the 2018 edition in Gold Coast, Australia.

He hoped that the success of the national lifters at Birmingham 2022 would catch the attention of the National Sports Council (NSC) to put weightlifting back as a core sport.

In 2017, weightlifting was among three sports dropped from the list of core sports, with the other two being sepak takraw and taekwondo.

This was due to the poor performances of the lifters and various other disciplinary issues, such as failed dope tests.