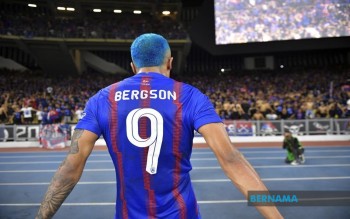 JDT had earlier gone ahead through Arif Aiman Mohd Hanapi (34th minute) before Bergson struck a brace in the 63rd and 78th minutes while TFC’s Kipre Thetche scored their consolation goal in the 75th minute.

What made today’s win sweeter for JDT is that this is the maiden triumph for their new coach from Venezuela, Hector Bidoglio after former coach Benjamin Mora quit the team citing personal reasons in July.

The win also allowed JDT to wrest back the trophy they last won in 2016, when they defeated PKNS FC 2-1. The FA Cup competition was cancelled in 2020 and 2021 due to the COVID-19 pandemic.

With JDT controlling the game, TFC had a golden chance to score the opening goal but skipper Kipre’s close-range attempt failed to beat experienced goalkeeper Mohd Farizal Marlias in the 25th minute.

But nine minutes later, Arif Aiman made no mistake.

Receiving a pass from Argentine import Leandro Velazquez, he stopped the ball with his right foot, tapped it ahead slightly and then slotted it with his left foot into the bottom corner, leaving TFC goalkeeper Muhammad Rahadiazli Rahalim rooted.

JDT then needed just a minute after the break to show they mean business when Bergson’s 30-metre piledriver was pushed out by keeper Muhammad Rahadiazli.

However, the TFC custodian was at fault in the 63rd minute when he fouled Bergson in the box, giving the referee no choice but to point to the spot.

The 31-year-old Brazilian picked himself up to send the goalkeeper the wrong way and put JDT 2-0 up.

TFC goalkeeper Muhammad Rahadiazli was again the culprit when he rushed out to clear the ball, only to lose it to JDT substitute Mohamadou Sumareh, who then sent a short pass to Bergson to chip into the net and spark off wild celebrations on and off the pitch.

Tonight’s final was graced by the Yang Dipertuan Muda Terengganu, Tengku Muhammad Ismail, who also shook hands with the players before the 9 pm kickoff.